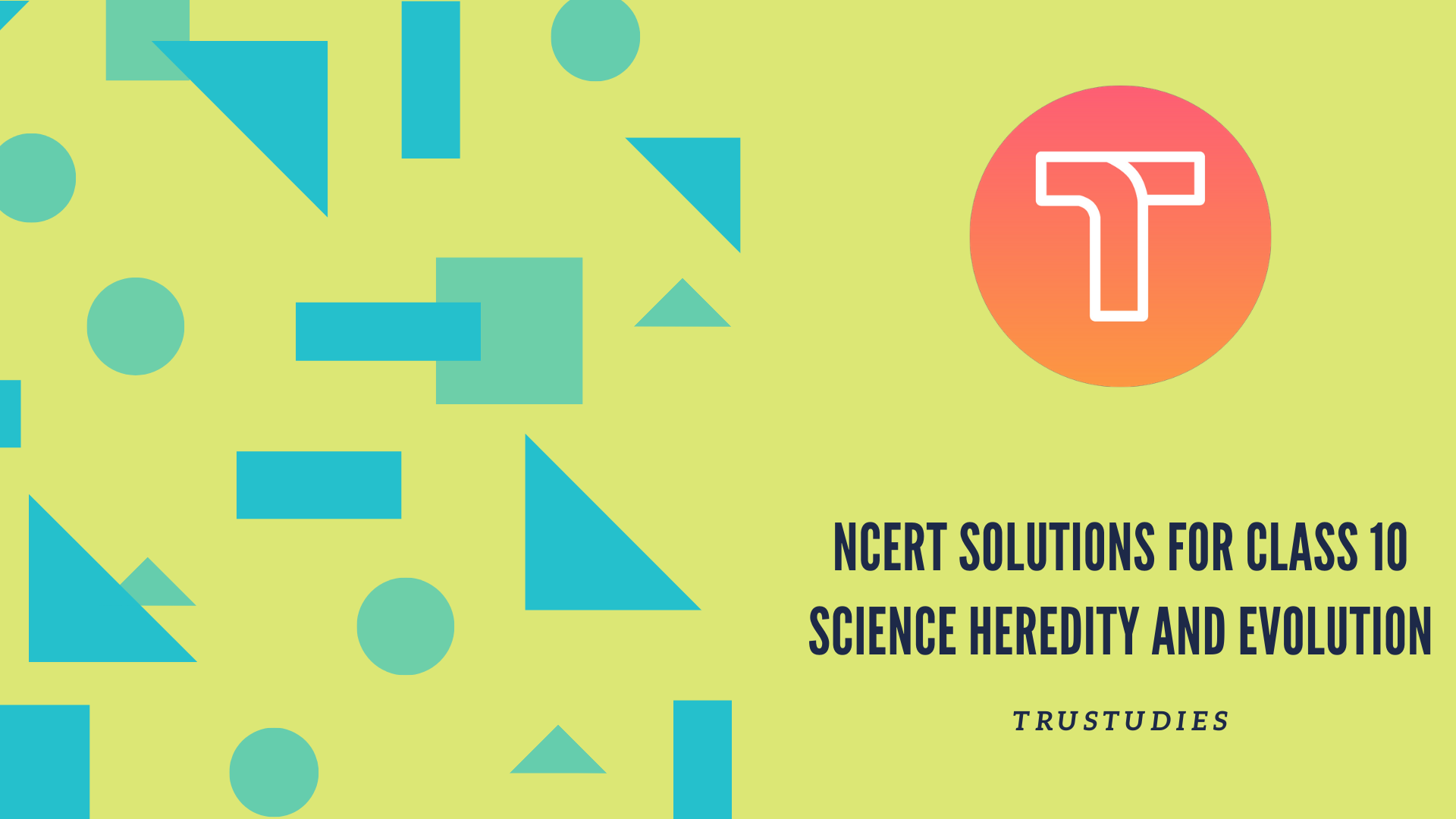 This is dihybrid cross of a plant involving two characters in the same plant. As the progeny bloomed with violet flowers, therefore, the tall plants have genotype WW. Again the plant is neither tall nor short, so the genotype is Tt.

Q2 ) An example of homologous organs is

This information is not sufficient. For considering a trait as dominant or recessive, we need data of at least three generations. This data is about only two generations.

Q5 ) How are the areas of study - evolution and classification - interlinked?

The field of evolution and classification are interlinked in the following manner:

(i) The more characteristics two species have in common, the more closely they are related. Classification of species is a reflection of their evolutionary relationship.

(ii) The more number of characteristics shared by two organisms more is the probability of them having common ancestor. Thus, classification of an organism is the reflection of its evolutionary path.

Q6 ) Explain the terms analogous and homologous organs with examples.

Homologus organs are those organs which have the same basic structural design and origin but have different functions.

For Example: The forelimbs of humans and the wings of birds look different externally but their skeletal structure is similar.

Q7 ) Outline a project which aims to find the dominant coat colour in dogs.

Q8 ) Explain the importance of fossils in deciding evolutionary relationships.

Fossil provide us evidence about

(i) The organisms that lived long ago such as the time period during which they lived, their structure etc.
(ii)Evolutionary development of species i.e., line of their development.

(iii) Connecting links between two groups. For example, feathers present in some dinosaurs means that birds are very closely related to reptiles.

(iv) Which organisms evolved earlier and which later.

Q9 ) What evidence do we have for the origin of life from inanimate matter ?

The evidence for the origin of life from inanimate matter, was provided through an experiment, conducted in 1953, by Stanley L. Miller and Harold C. Urey. In experiment, they assembled an atmosphere containing molecules like ammonia, methane and hydrogen sulphide, but no oxygen, over water. This was similar to atmosphere that thought to exist on early earth . This was maintained at a temperature just below 100°C and sparks were passed through the mixture of gases to simulate lightning. At the end of a week, 15% of the carbon from methane, had been converted to simple compounds of carbon including amino acids which make up protein molecules and support the life in basic form. Thus, amply suggesting that life arose afresh on earth.

(i) Error in copying of DNA, which are not highly significant.

(ii) Random seggregation of paternal and maternal chromosome at the time of gamete formation.

(iii) Exchange of genetic material between homologous chromosomes during formation of gametes.

(iv) Accumulation of variations occured due to sexual reproduction over generation after generation and selection by nature created wide diversity.

In case of asexual reproduction, only the very small changes due to inaccuracies in DNA copying pass on the progeny. Thus, offsprings of asexual reproduction are more or less genetically similar to their parents. So, it can be concluded that evolution in sexually reproducing organisms proceeds at a faster pace than in asexually repoducing organisms.

Q11 ) How is the equal genetic contribution of male and female parents ensured in the progeny?

During the course of reproduction, as fertilization process takes place, the male gamete (haploid) fuses with the female gamete(haploid) resulting in formation of the diploid zygote. The zygote in the progeny receive an equal contribution of genetic material from the parents. Out of 23 pairs of chromosomes in progeny, male parent contributes 22 autosomes and one X or Y chromosome and female parent contributes 22 autosomes and one X chromosome.

Q12 ) Only variations that confer an advantage to an individual organism will survive in a population. Do you agree with this statement? Why or why not?

In species, variations that offer survival advantages are naturally selected. Individuals adjust to their environments with the help of these selected variations and consequently these variations are passed on to their progeny. Evolution of organisms occurs as a result of this natural selection.

However, there can be some other variations, which do not offer any survival advantage and arise only accidentally. Such variations in small populations can change the frequency of some genes even if they are not important for survival.

This accidental change in the frequency of genes in small populations is referred to as genetic drift.

Q1 ) If a trait A exists in 10% of a population of an asexually reproducing species and a trait B exists in 60% of the same population, which trait is likely to have arisen earlier?

Trait B is likely to have arisen earlier because it is present in a larger percentage of the population.

Q2 ) How does the creation of variations in a species promote survival?

The changes in the environment brings out Variations in the species. Such variations enable stability to the population of various species by preventing them from getting wiped out during adverse conditions. Thus, variations help a species in survival.

Q3 ) How do Mendel’s experiments show that the traits may be dominant or recessive?

Q4 ) How do Mendel’s experiments show that traits are inherited independently?

Mendel took two pairs of alternate expressions of two traits and carried out hybrid crosses by crossing them and named the traits that appeared in the first generation as dominant. When he used these progeny to generate progeny by self-pollination, plants of different types were produced and saw that in some plants both the traits were dominant, while in some plants both were recessive and some plants exhibited mixed traits. This indicates that traits are inherited independently.

This information is not sufficient. This is because each individual is carrying two alleles and the recessive trait can occur only when alleles are similar.For considering a trait as dominant or recessive, data of three generations is required but here we have data of only two generations.

Q6 ) How is the sex of a child determined in human beings? 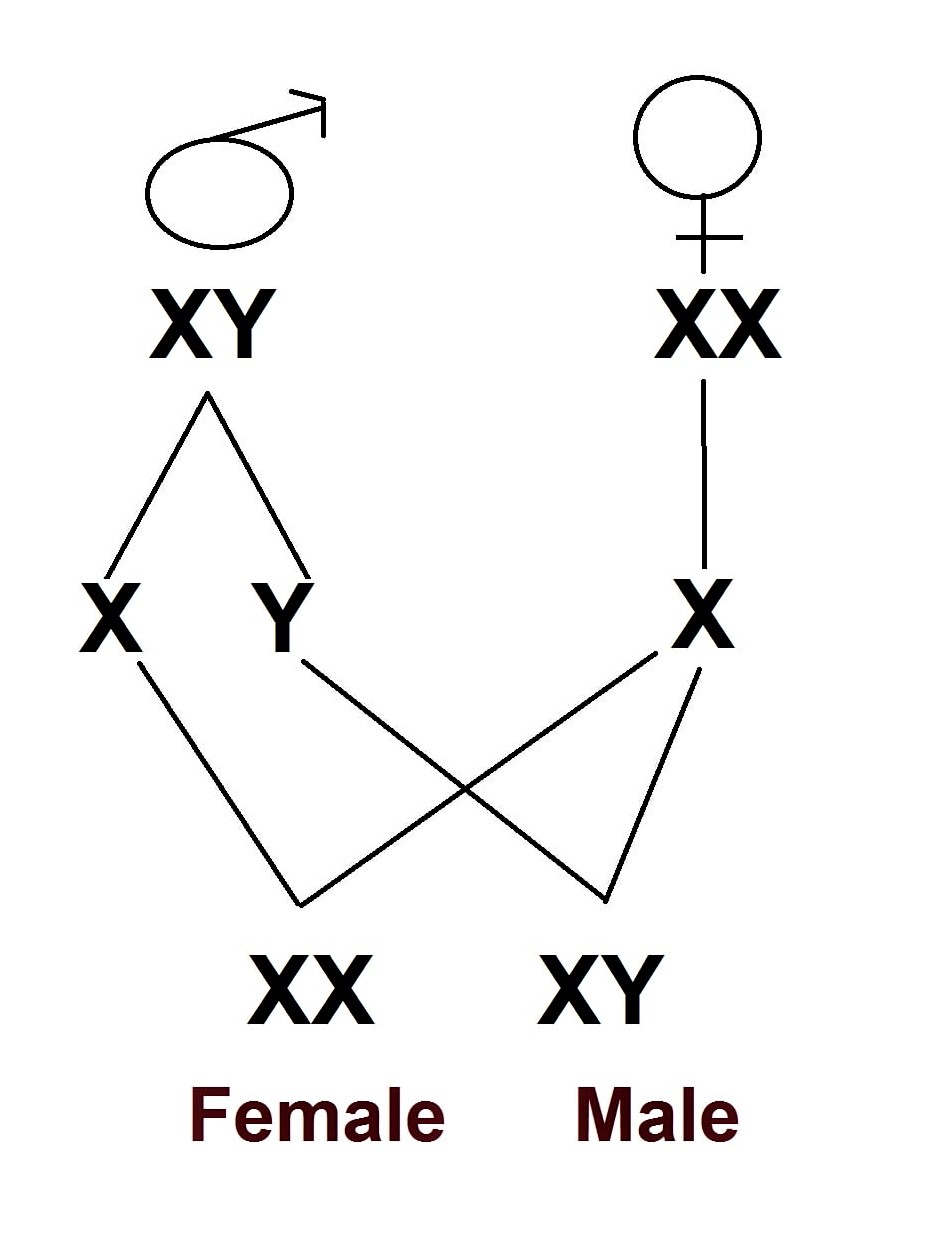 Q7 ) What are the different ways in which individuals with a particular trait may increase in a population?

Different ways in which individuals with a particular trait may increase in a population are as follows :

(ii)Due to genetic drift, a sudden increase in a particular trait in a population.

Q8 ) Why are traits acquired during the lifetime of an individual not inherited?

Q9 ) Why are the small numbers of surviving tigers a cause of worry from the point of view of genetics?

The small numbers of surviving tigers is a cause of worry from the point of view of genetics because there are negligible genetic variations if there is a small number of population. Due to this they are not well adapted in the rapid environmental changes which are not favourable for them. If these changes are not controlled, a time may come when lack of useful variations may result in extinction of tigers.

Q10 ) What factors could lead to the rise of a new species?

Rise in new species can happen if two groups of the same species are somehow prevented from interbreeding for several generations. This can happen because of geographical isolation or because of some genetic drifts.Geographical isolation of a population caused by various barriers (such as mountain ranges, rivers and sea) which leads to reproductive isolation due to which there is no flow of genes between separated groups of population.Also the Genetic drift caused by drastic changes in the frequencies of particular genes alone can also be the reason.

Q11 ) Will geographical isolation be a major factor in the speciation of a self-pollinating plant species? Why or why not?

The geographical isolation cannot be a major factor in the speciation of a self-pollinating plant species because in the process of reproduction to be carried out it does not have to look at the other plants i.e, no new trait can become a part of the genotype in self-pollination plant species.However, there are chances of some variation that can occur due to the change in environment..

Q12 ) Will geographical isolation be a major factor in the speciation of an organism that reproduces asexually? Why or why not ?

Geographical isolation cannot be a major factor in the speciation of an asexually reproducing organism because it does not require any other organism to carry out reproduction i.e, there is no exchange of genetic material with the other species in such organisms..

Q13 ) Give an example of characteristics being used to determine how close two species are in evolutionary terms.

If similar characteristics are shown in different organisms, then these are considered to be inherited from the common ancestry. It also shows the closeness of the species.For example, humans and apes have some similarity in their body designs, so they are closely related in evolutionary terms.Now take humans and fishes which have vertebral columns,brain box etc as common but look completely different from each other. Hence they are not closely related rather they are like distant relatives.

Q15 ) What are fossils? What do they tell us about the process of evolution?

Fossils: Fossils are the remains or traces of a dead organism from the distant past. They tell about the changes and development that occurred on the earth’s surface and to the complex structured organisms from simple structured organisms.They exhibit the process of human evolution and states that angiosperms are developed from pteridophytes and gymnosperms and many more details which helps to understand the evolution and changes in environment.

Q16 ) Why are human beings who look so different from each other in terms of size, colour and looks said to belong to the same species?

In spite of wide differences in size, colour and looks, human beings can interbreed i.e, they can reproduce among themselves and produce fertile offspring which says that there is no reproductive isolation. Hence, all of them are kept under one species.

Q17 ) In evolutionary terms, can we say which among bacteria, spiders, fish and chimpanzees have a ‘better’ body design? Why or why not?

It depends on our consideration of ‘better’ design.If criteria like complexity of body design is considered, then chimpanzees are obviously better than bacteria. But if the criteria is ability of survival in all kinds of habitat then bacteria are far ahead than any other group of organisms.