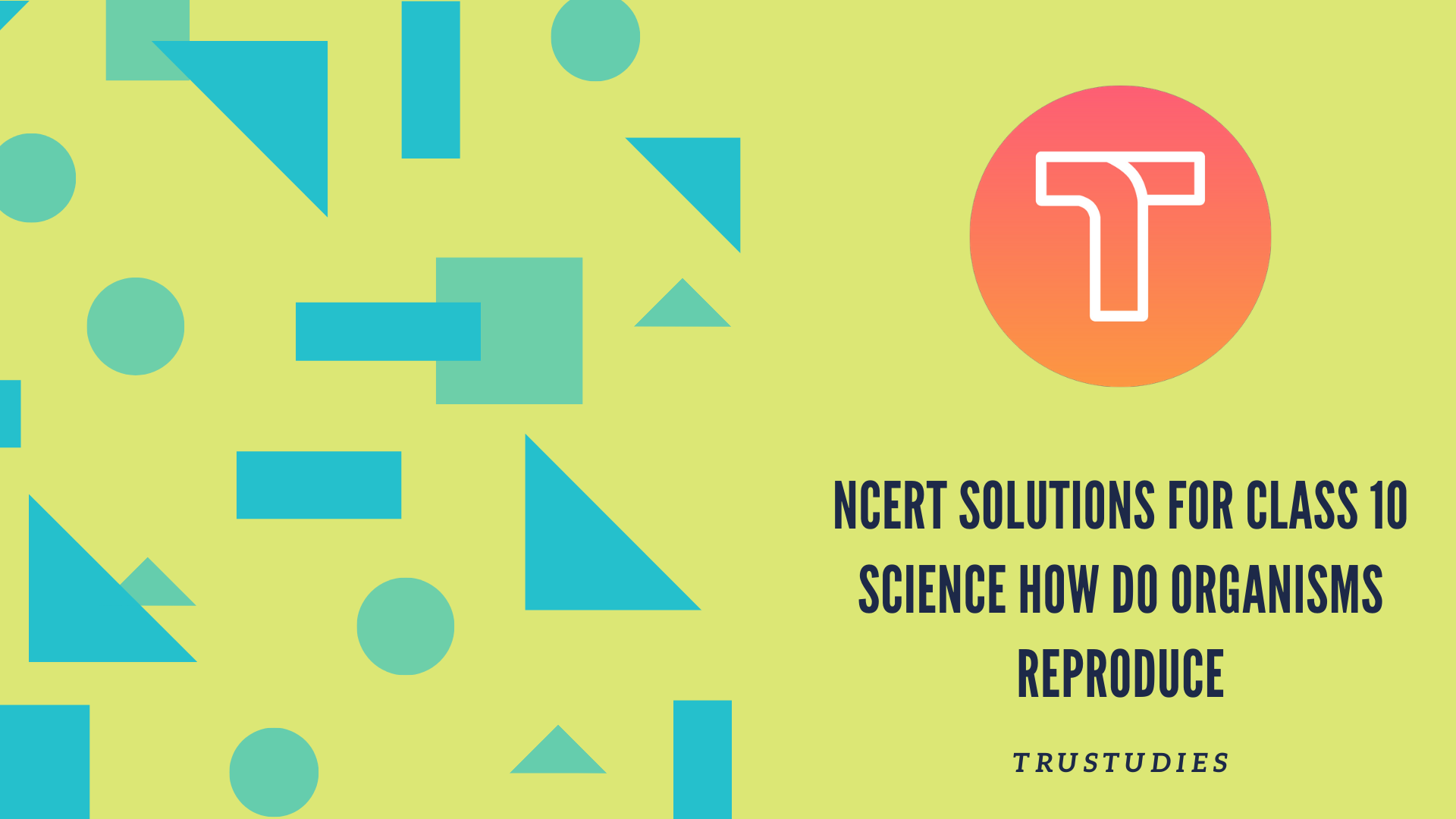 Q2 ) Which of the following is not a part of the female reproductive system in human beings ?
(a) Ovary
(b) Uterus
(c) Vas deferens
(d) Fallopian tube

In asexual reproduction, there is no much genetic variation as the offspring are almost identical to their parent because they have the same genes as their parent.This inhibits the further evolution of the organism hence seen as an disadvantage whereas in sexual reproduction even if the offspring is quite similar to their parents, they are not identical to them or to one another because the offspring receive some genes from the mother and some from the father. There is a greater genetic variation because of the mixing of genes of mother and father in various different combinations. In this way, sexual reproduction leads to a greater variety in population which means that a species (animal or plant) can adapt quickly to changes in its surroundings.

Q5 ) What are the functions performed by testes in human beings?

The functions of testes in humans are following :
(i) After the stage of adolescence, testes produce male gametes(sperms) in the human males.
(ii)testes produce male sex hormone called testosterone. Testosterone takes care of the development of reproductive organs and secondary sexual characters in boys.

Q6 ) Why does menstruation occur ?

In human females, one mature egg forms each month from the onset of puberty.If the egg does not get fertilized (due to non-availability of sperm in the female body) then the inner linings of the uterus which are thick and soft is no longer needed and hence it breaks. So, these linings of the uterus along with the blood vessels and the dead ovum (or egg) comes out of the vagina in the form of blood called menstruation. Menstruation occurs after the interval of every 28 days and the time period between ovulation and menstruation is about 14 days.

Q7 ) Draw a labeled diagram of the longitudinal section of a flower.

Q8 ) What are the different methods of contraception?

The different methods of contraception are as follow :
(i)Barrier method : In this method,during sexual intercourse condom, diaphragm and cervical caps are used which prevent the entry of sperms in the female genital tract.
(ii)Chemical method: In this method a woman uses two kinds of pills- oral and vaginal pills. The oral pills suppress the release of ovum in the fallopian tube. These are called oral contraceptives. The vaginal pills/ creams are spermicidal which contain chemicals that kill the sperms during their journey in the vaginal tract.
(iii)Intrauterine contraceptive devices: Intrauterine contraceptive devices like copper-T are placed safely in the uterus by a skilled doctor which prevents the sperms from reaching the uterus.
(iv)Surgical method: In this method, a small part of vas deferens of male and fallopian tube of female is cut or tied by surgery. It is called vasectomy in males and tubectomy in females.

Q9 ) How are the modes of reproduction different in unicellular and multicellular organisms?

Q10 ) How does reproduction help in providing stability to populations of species ?

Reproduction is the process in which new individuals of the same species are produced by existing organisms ,so it helps in maintaining the stability to the population of a species.Also the introduction of genetic variation during reproduction helps in preventing them from getting wiped out during adverse conditions.

Q11 ) What could be the reasons for adopting contraceptive methods ?

The reasons for adopting contraceptive methods are listed as:
(i) To control the increase in population by controlling the birth rate.
(ii)To avoid unwanted pregnancy.
(iii) To provide protection from sexually transmitted diseases like HIV.

Q1 ) What is the importance of DNA copying in reproduction?

The importance of DNA copying in reproduction are:
(i) DNA copying is the basis of inheritance of traits transferring from parents to offspring by which the characteristics of species and continuity of life are maintained.
(ii) During copying of DNA, sometimes variations are produced in organisms which is the basis for evolution of new species.

Q2 ) Why is variation beneficial to the species but not necessarily for the individual?

Variations can be beneficial or harmful depending upon the ecological niche of the organism.Nature of evolution selects the variation suitable for the particular niche. Thus variations are necessary for the survival of the species. But sometimes variation in an individual may result in death of that individual or the individuals who are not evolved also die due to non-favorable conditions of the change in surroundings.So collectively we can say that variation are beneficial to the species but not necessarily for the individual.For e.g. If the temperature of water increases by global warming the population of heat resistant bacteria in water will survive but most other bacteria would die.

Q3 ) How does binary fission differ from multiple fission?

Binary fission: It is the process of asexual reproduction, in which parent organism divides to form two new organisms.It generally occurs in favourable conditions. For e.g. Amoeba-Amoeba reproduces by binary fission.

Multiple fission: It is the process of asexual reproduction, in which parent organism divides to form two or more new organisms. It can take place in unfavourable conditions too. for eg. Plasmodium- Plasmodium reproduces by multiple fission. 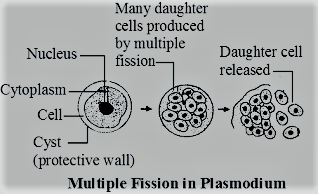 Q4 ) How will an organism be benefited if it reproduces through spores?

Spores are covered by a thick layer that protects them in adverse conditions like lack of food, water or high temperature. When the favourable conditions occur, these spores start to grow again. So an organism can be benefited if it reproduces through spores.

Q5 ) Can you think of reasons why more complex organisms cannot give rise to new individuals through regeneration?

Q6 ) Why is vegetative propagation practiced for growing some types of plants?

Vegetative propagation is done for growing such plants which usually do not produce seeds or produce plants in which viable seeds are not formed or very few seeds are produced.

e.g:- Orange, Banana, Pineapple.Also it is an easier, rapid and cheaper method and a good quality of a race or variety can be preserved even in the areas where seed germination fails to produce mature plants.

Q7 ) Why is DNA copying an essential part of the process of reproduction?

DNA contains the genetic information.It is an essential part of the process of reproduction to transfer the characteristics of the parent organisms to the offspring and also some variations are to be produced in the offspring due to change in DNA copying which provide an organism the capability to survive in changing conditions.

Q8 ) How is the process of pollination different from fertilization?

Pollination- In this process by which pollen grains are transferred from the anther of a stamen to the stigma of a carpel of the same flower or another flower.It takes place by various pollinating agents.
Fertilization- It is defined as the fusion of male gamete present in pollen grain and female gamete (or egg) present in ovule to form zygote.It takes place by natural or artificial ways.

Q9 ) How is the role of seminal vesicles and prostate gland?

Seminal vesicles and prostate gland are part of the male reproductive system. They both add their secretion to vas deferens which carries sperms from the testes,thus making the transport of sperms much easier. This secreted fluid provides nutrition to sperms in the form of fructose, calcium and some enzymes and also protects the sperms from the acids present in the urethra.

Q10 ) What are the changes seen in girls at the time of puberty?

At the time of puberty changes seen in girls are:
(i)Mammary glands(or breasts) develop and enlarge.
(ii)Menstruation(monthly periods) starts.
(iii)Hairs grow in armpits and pubic regions.
(iv)Extra fat deposited in thighs and hips and in other body parts and the hips gets broadened.
(v)Fallopian tube, uterus and vagina enlarge and feelings and sexual drives associated with adulthood begin to develop .

Q11 ) How does the embryo get nourishment inside the mother’s body ?

The embryo gets nourishment through a disc-shaped tissue called placenta which contains villi and connects the mother body and embryo.There are empty spaces in mother’s tissues that cover the villi. It provides a large surface area for the transfer of glucose, oxygen and other substances from the mother to the embryo.

Q12 ) If a woman is using a copper- T, will it help in protecting her from sexually transmitted disease?

Copper-T cannot prevent a woman from sexually transmitted diseases as it is a contraceptive method which prevents implantation of the zygote inside the uterus. These diseases are transmitted by contact which cannot be prevented by using it.