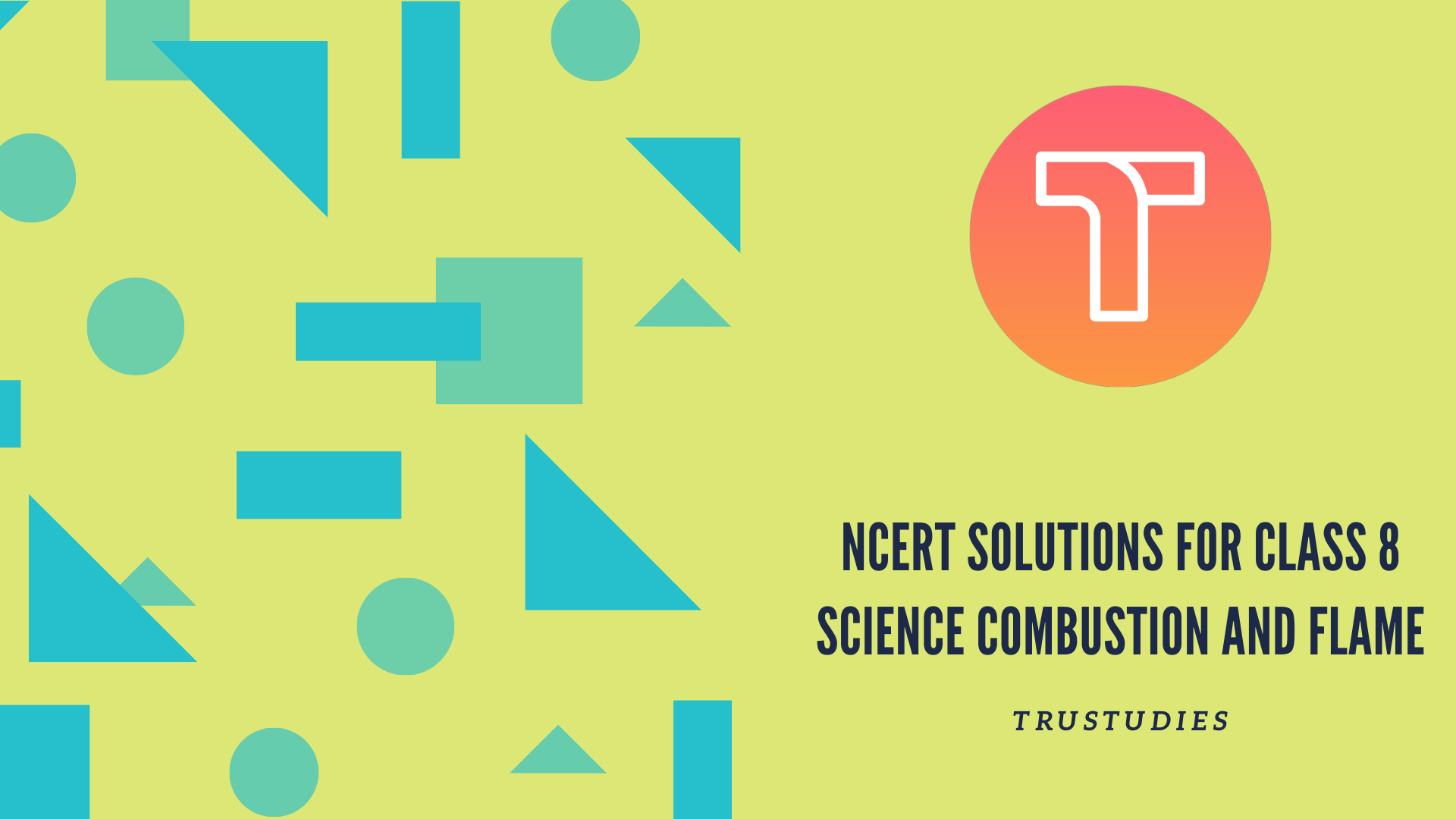 Q.1 List conditions under which combustion can take place.

Combustion: It is a chemical process in which a substance reacts rapidly with oxygen and gives off heat. The original substance is called the fuel, and the source of oxygen is called the oxidizer.

(a) Burning of wood and coal causes pollution of air.
(b) A liquid fuel, used in homes is LPG.
(c) Fuel must be heated to its ignition temperature before it starts burning.
(d) Fire produced by oil cannot be controlled by water.

(a) The most important pollutants of burning firewood are particulate matter (PM), soot or black carbon which are potentially carcinogenic(cancer causing) compounds. Wood burning generates nitrogen oxide and carbon monoxide which are major air pollutants. Burning of coal results in emission of sulfur dioxide (SO2), which contributes to acid rain and respiratory illnesses, nitrogen oxides (NOx), which contribute to smog and respiratory illnesses, carbon dioxide (CO2), which is the primary greenhouse gas.

(b) The main reason behind LPG being a popular choice of fuel for domestic use, is that it promises a low level of fuel consumption. LPG equipments do not demand high maintenance and it also has a narrow range with respect to flammability.

(d) Water cannot put off fire produced by oil because water is heavier than oil. It settles down or sinks below the oil particles and thus cannot bring the ignition temperature of the substance down. Hence, oil keeps on burning on the top.

Q.3 Explain how the use of CNG in automobiles has reduced pollution in our cities.

The use of CNG in automobiles has reduced pollution in our cities in the following ways:-

(a) CNG automobiles emits less carbon dioxide, carbon monoxide, sulphur dioxide and nitrogen dioxide which is beneficial for the environment as CNG plays a crucial role in preventing global warming and acid rain.

(b) CNG automobiles leave no residue after its combustion thus undergoing complete and clean combustion.

(i) It does not cause pollution on combustion.
(ii) Its does not produce smoke as it undergoes complete combustion.
(iii) It is gaseous fuel which is kept under pressure by liquifying it.
(iv) It has a high calorific value (55000 kJ/kg).
(v) It can be easily transported in cylinders as it is stored in liquid state.

(i) It causes pollution on combustion.
(ii) It produces smoke and soot as it undergoes incomplete combustion.
(iii) It is a solid fuel.
(iv) It has a low calorific value (17000 kJ/kg).
(v) It can’t be transported easily like LPG fuels.

Q.5 Give reasons.
(a) Water is not used to control fires involving electrical equipment.
(b) LPG is a better domestic fuel than wood.
(c) Paper by itself catches fire easily whereas a piece of paper wrapped around an aluminium pipe does not.

b) LPG is a cleaner fuel than wood as it undergoes complete combustion and doesn’t release smoke and other pollutants. But wood releases a lot of smoke and fumes, thus polluting the atmosphere and leading to various respiratory diseases. Hence, LPG is a better domestic fuel than wood.

Q.6 Make a labelled diagram of a candle flame. 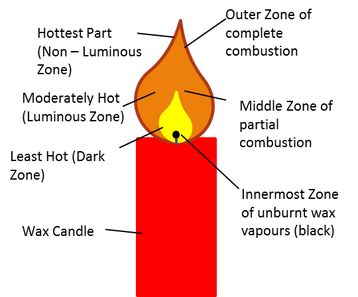 Q.7 Name the unit in which the calorific value of a fuel is expressed.

Calorific value is defined as the energy contained in the fuel.
It is expressed in the form kJ/kg.

Q.8 Explain how CO2 is able to control fires.

CO2 is a non-combustible gas and extinguishes fire in two ways:

(i) It is heavier than oxygen and covers the fire like a blanket. It cuts off the contact between oxygen and fuel by displacing oxygen.

(ii) In cylinders, CO2 is kept in the liquid form. As it is released from the cylinder CO2 expands enormously. This is an effective way to put out fires and also prevent fire from reoccurring because of the lack of oxygen and the ice cold temperature of the CO2 when released from the extinguisher.

Q.9 It is difficult to burn a heap of green leaves but dry leaves catch fire easily. Explain.

A heap of green leaves has a lot of water content which makes their burning a long process. As they have high ignition temperature, hence they does not catch fire easily.

As dry leaves have less water content or no water content, hence their ignition temperature is low. As a result they catch fire easily.

Q.10 Which zone of a flame does a goldsmith use for melting gold and silver and why?

A goldsmith uses the outermost zone of a flame, which is non-luminous and is the hottest zone of the flame thus providing required temperature for melting gold and silver.

A candle flame consists of three different zones. Each zone has different temperature and different colour.

Due to complete combustion, the outer zone is blue in colour. This zone is the hottest zone as compared to the other zones. This blue coloured zone is the non-luminous part of the flame.

The yellow colour region which is the bright part of the flame is the middle zone. It is moderately hot and exhibits partial combustion of fuel.

The least hot region of the flame is the inner zone. This inner zone is black due to the presence of unburnt wax vapours as it undergoes incomplete combustion due to lack of oxygen.

Q.11 In an experiment, 4.5 kg of a fuel was completely burnt. The heat produced was measured to be 180,000 kJ. Calculate the calorific value of the fuel.

Q.12 Can the process of rusting be called combustion? Discuss.

Combustion is a rapid process while rusting is a slow process.

Hence the process of rusting cannot be called as combustion

The outermost part of the flame is the hottest zone of the flame as it undergoes complete combustion, so the container placed in this zone gets heated first. This part of flame is called as non-luminous flame.

The wick in the yellow part of the flame is the least hot zone, so it takes comparatively more time to heat the container. This part of flame is called as luminous flame.