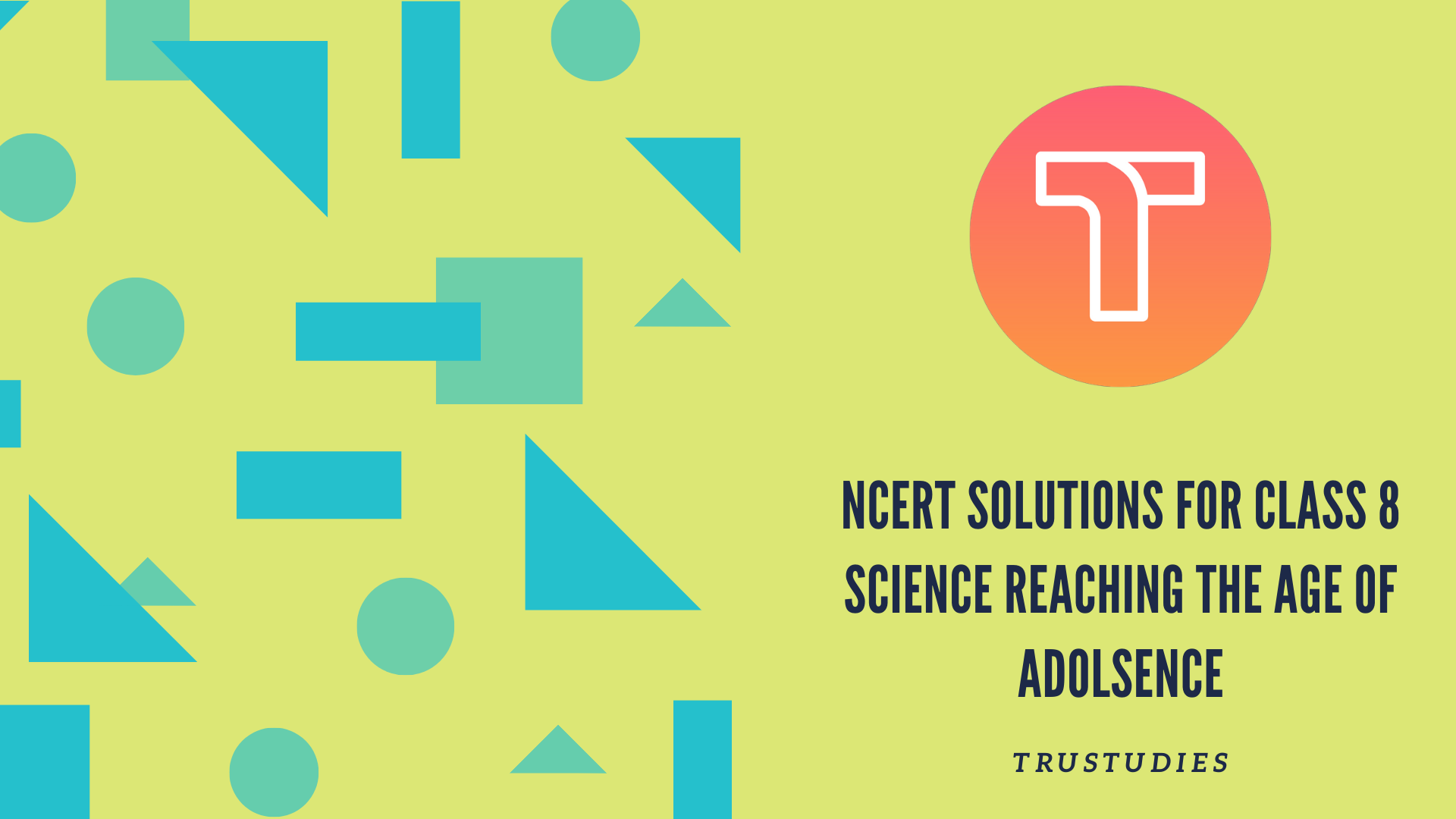 Q.1 What is the term used for secretions of endocrine glands responsible for changes taking place in the body?

Hormones are used for secretions of endocrine glands and are responsible for changes taking place in the body.

A hormone is a member of a class of signaling molecules in multicellular organisms, that are transported to distant organs to regulate physiology and behaviour.

The main function of endocrine glands is to secrete hormones directly into the bloodstream to serve as messengers, controlling and coordinating activities throughout the body.

The period of life when the body undergoes changes, thus leading to reproductive maturity, is called adolescence.

The period of adolescence is normally between 11 to 19 years of age.

Q.3 What is menstruation? Explain.

Menstruation is the process of the shedding of the uterine lining which is basically the blood lining, on a regular monthly basis. It begins at puberty when the female individual starts producing ovum. The ovum is released into the fallopian tube and waits till it gets fertilized by a sperm, otherwise it sheds along with the blood vessels during menstruation.

The blood vessels develops in the uterine lining in the form of a cushion to receive a fertilized egg. As a result the inner lining of the uterus becomes thick and is supplied with blood to nourish the growing embryo. If the ovum is not fertilized, then the lining of the uterus breaks down and gets released in the form of blood through the vagina. This lasts for about two to eight days. As the cycle occurs every month, so it is known as the menstrual cycle.

Q.4 List changes in the body that take place at puberty.

Changes in the body that take place at puberty are as follows:

(i) There is sudden increase in height and weight of adolescents.

(ii) There is broadening of shoulders and widening of chest in boys while the region below waist becomes wider in case of girls.

(iii) Due to hormonal changes the larynx becomes prominent and the vocal cords become longer and thicker which causes the voice to become hoarse. In case of boys, this increase of vocal cord is visible and hence called as Adam's apple.

(iv) There is growth of hair in areas such as underarms, pubic region, face, hands, and legs. Boys grow moustache and beard while girls have a increase in the size of their breast.

(v) There is appearance of acne as a result of excessive secretion of oil from skin in both boys and girls.

Q.5 Prepare a table having two columns depicting names of endocrine glands and hormones secreted by them.

Q.6 What are sex hormones? Why are they named so? State their function.

This hormone develops secondary sexual characters in boys such as the growth of beard, hoarseness of the voice, development of secondary reproductive organs, etc. It also regulates bone mass, fat distribution, muscle mass, strength and the production of red blood cells and sperm.

This hormone develops secondary sexual characters in females such as the enlargement of breasts, development of female reproductive organs and pubic hair etc. It keeps cholesterol in control and protects bone health and also maintains the menstrual cycle and ovum production.

(a) Adolescents should be careful about what they eat, because:

(i) proper diet develops their brains.
(ii) proper diet is needed for the rapid growth taking place in their body.
(iii) adolescents feel hungry all the time.
(iv) taste buds are well developed in teenagers.


(b) Reproductive age in women starts when their:


(c) The right meal for adolescents consists of:

(a) Adolescents should be careful about what they eat, because :
(ii) proper diet is needed for the rapid growth taking place in their body.

(b) Reproductive age in women starts when their :
(i) menstruation starts.

When there is an increase in the size of the larynx during puberty, it sticks out at the front of the throat. Everyone's larynx grows during puberty, but a girl's larynx doesn't grow as much as a boy's larynx grows. As boys' larynx grows more, it makes their voices deeper than girls' voice. In boys, the voice box tends to protrude out on the upper part of the neck, below the chin and is referred as Adam’s apple.

Secondary sexual characteristics are the features that appear during puberty in humans, and at sexual maturity in other animals. These characters are visible more apparently and thus help in distinguishing a male from a female. In humans, visible secondary sexual characteristics include pubic hair, enlarged breasts and widened hips in females and facial hair and Adam's apple in males.

Q.9 Word game: Use the clues to work out the words. 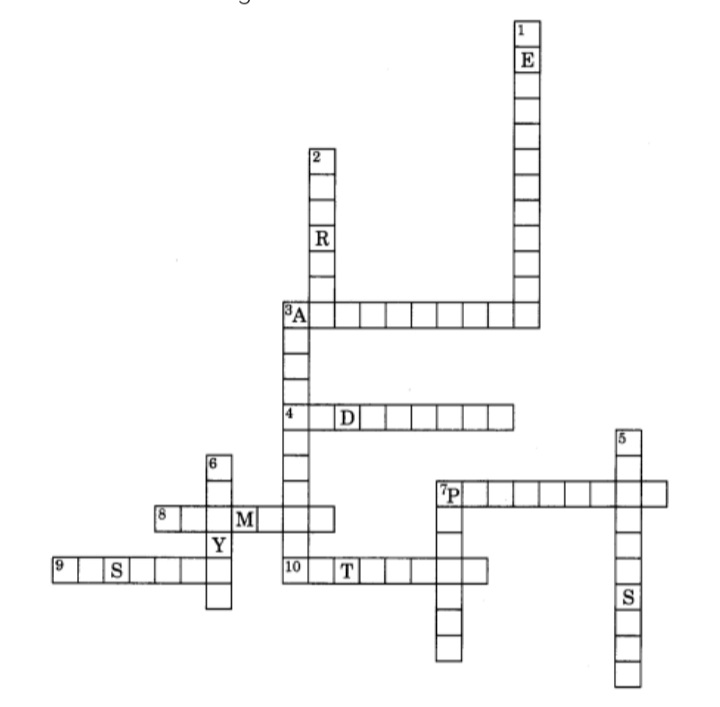 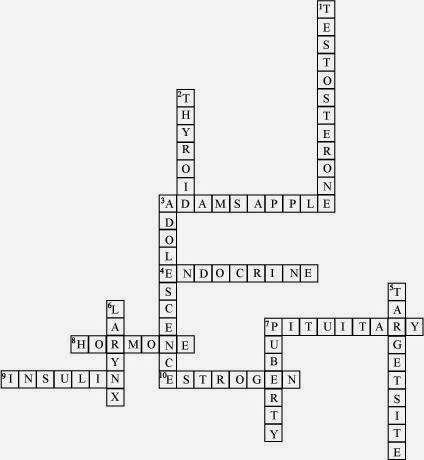 The endocrine system is a chemical messenger system which consists of loops of the hormones released by internal glands of an organism directly into the circulatory system, thus regulating distant target organs.

A hormone is a member of a class of signaling molecules in multicellular organisms, that are transported to distant organs to regulate physiology and behaviour. They travel in through the bloodstream to tissues or organs.

Insulin is a hormone that lowers the level of glucose (a type of sugar) in the blood. It is made up of beta cells of the pancreas and is released into the blood when the glucose level goes up, as it lowers the sugar level.

Estrogen is a sex hormone which is responsible for the development and regulation of the female reproductive system and their secondary sex organs with their characteristics. It also regulates the production of ovum once in a month and also controls the menstruation process.


Testosterone is a sex hormone which is responsible for the development and regulation of the male reproductive system and their secondary sex organs with their characteristics. It also regulates the production of appropriate amount of sperms required for fertilisation.

The thyroid gland, is an endocrine gland present in the neck which consists of two connected lobes. It plays a major role in the metabolism, growth and development of the human body. It helps to regulate many body functions by constantly releasing a steady amount of thyroid hormones into the bloodstream.

The target site is the tissue or organ on which the enzyme or hormone acts. For example, the follicle stimulating hormone secreted by the pituitary gland, targets the ovary in females and the testis in males. The enzymes do not cause any effect on tissues or organs other than the target site.

The larynx is commonly called as voice box. It is an organ in the top of the neck which is involved in breathing, producing sound and protecting the trachea from the food transmission. The larynx manipulates pitch and volume, which is essential for phonation.

Puberty is the process of physical changes through which a child's body matures into an adult body and becomes capable for sexual reproduction.

Q.10 The table below shows the data on likely heights of boys and girls as they grow in age. Draw graphs showing height and age for both boys and girls on the same graph paper. What conclusions can be drawn from these graphs?

The graph shows the relation between the age and height of boys and girls with a comparison between both of them.

From the above graph, we conclude that initially boys grow faster than girls from 0-8 years.

At reaching puberty, both has a sudden rise in their height, though the girls grow faster than boys from 8-16 years.

Both reach their maximum height at the age of 20. Here the boys show a greater increase in height than girls.

Now, growth in both of them comes to a halt, upon reaching the end of adolescence as the hormonal changes and their secretions had become stable at this point.