1. What is sound and how is it produced?

Sound is produced due to vibrations. When a body vibrates, it forces the adjacent particles of the medium to vibrate. This results in a disturbance in the medium, which travels as waves and reaches the ear. Hence sound is produced.

2. Describe with the help of a diagram, how compressions and rarefactions are produced in the air near a source of sound.

When the school bell is hit with a hammer, it moves forward and backwards producing compression and rarefaction due to vibrations. When it moves forward, it creates high pressure in its surrounding area. This high-pressure region is known as compression. When it moves backwards, it creates a low-pressure region in its surrounding. This region is called rarefaction. 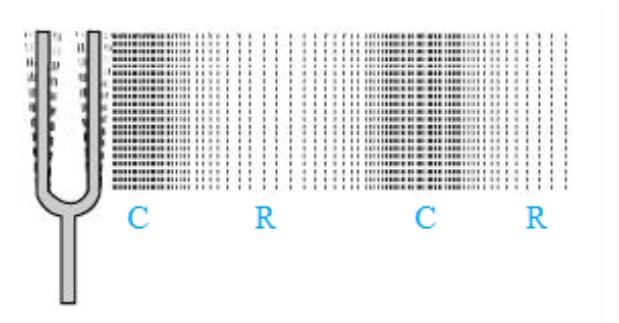 3. Cite an experiment to show that sound needs a material medium for its propagation.

Take an electric bell and hang it inside an empty bell-jar which is fitted with a vacuum pump. 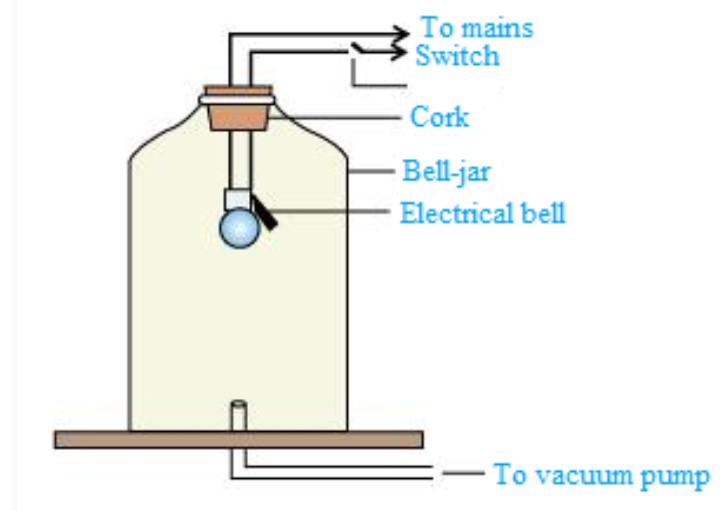 Initially, one can hear the sound of the ringing bell. Now, pump out some air from the bell-jar using the vacuum pump. You will realise that the sound of the ringing bell decreases. If you keep on pumping the air out of the bell-jar, then glass-jar will be devoid of any air after some time. Now try to ring the bell. No sound is heard but you can see bell prong is still vibrating. When there is no air present in the bell jar, a vacuum is produced. Sound cannot travel through vacuum. Therefore, this experiment shows that sound needs a material medium for its propagation.

4. Why sound wave is called a longitudinal wave?

5. Which characteristics of the sound help you to identify your friend by his voice while sitting with others in a dark room?

Quality of sound is a characteristic that helps us identify the voice of a particular person. Two people may have the same pitch and loudness, but their qualities will be different.

6. Flash and thunder are produced simultaneously. But thunder is heard a few seconds after the flash is seen, why?

7. A person has a hearing range from 20 Hz to 20 kHz. What are the typical wavelengths of sound waves in air corresponding to these two frequencies? Take the speed of sound in air as 344 m/s.

8. Two children are at opposite ends of an aluminium rod. One strikes the end of the rod with a stone. Find the ratio of times taken by the sound wave in the air and in aluminium to reach the second child.

Speed of sound wave at 25° C in aluminium,

Time taken to reach other end

Speed of sound in air,

Time taken by sound to each other end,

? the ratio of time taken by sound in aluminium and air,

9. The frequency of a source of sound is 100 Hz. How many times does it vibrate in a minute?

The source vibrates 6000 times in a minute and produces a frequency of 100 Hz.

10. Does sound follow the same laws of reflection as light does? Explain.

11. When a sound is reflected from a distant object, an echo is produced. Let the distance between the reflecting surface and the source of sound production remains the same. Do you hear echo sound on a hotter day?

12. Give two practical applications of reflection of sound waves.

(i) Reflection of sound is used to measure the speed and distance of underwater objects. This method is called SONAR.

(ii) Working of a stethoscope – the sound of patient’s heartbeat reaches the doctor’s ear through multiple reflections of sound.

Initial velocity (u) of the stone = 0

Time taken by the stone to fall to tower base

Time taken by sound to reach top from tower base = .

15. What is reverberation? How can it be reduced?

The continuous multiple reflections of sound in a big enclosed space is reverberation. It can be reduced by covering walls and ceiling of enclosed space with the help of sound absorbing materials such as loose woollens, fibre boards.

16. What is loudness of sound? What factors does it depend on?

17. Explain how bats use ultrasound to catch prey.

Bats have the ability to produce high-pitched ultrasonic squeaks. These squeaks get reflected by objects like preys and return to their ears. This helps a bat to know how far his prey is. 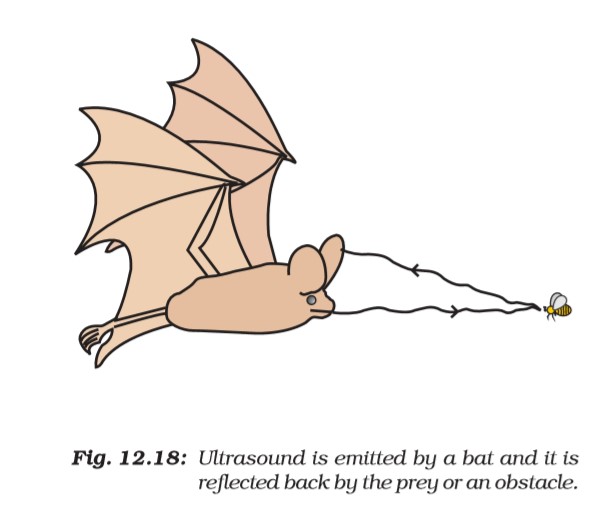 18. How is ultrasound used for cleaning?

Objects that need to be cleansed are put in a cleaning solution and ultrasonic sound waves are passed through the solution. The high frequency of ultrasound waves helps in detaching the dirt from the objects. In this way ultrasound is used for cleaning purposes.

19. Explain the working and application of a sonar.

SONAR is an abbreviation of Sound Navigation and Ranging. It is an acoustic device used in measuring the direction, speed, and depth of under-water objects viz. ship wrecks and submarines using ultrasound.

(i) Sonar consists of a transmitter and a detector and is installed in a boat or a ship.

(Ii) The transmitter produces and transmits ultrasonic waves. These waves travel through water and after striking the object on the seabed, get reflected back and are sensed by the detector.

(iii) The detector converts the ultrasonic waves into electrical signals which are appropriately interpreted.

(iv) The distance of the object that reflected the sound wave can be calculated by knowing the speed of sound in water and the time interval between transmission and reception of the ultrasound.

?? Let the time interval between transmission and reception of ultrasound signal be t and the speed of sound through seawater be v. The total distance, 2d travelled by the ultrasound is then, .

This method of measuring distance is also referred to as echo-ranging.

20. A sonar device on a submarine sends out a signal and receives an echo 5 s later. Calculate the speed of sound in water if the distance of the object from the submarine is 3625 m.

Velocity (v) of sound in water =

21. Explain how defects in a metal block can be detected using ultrasound. 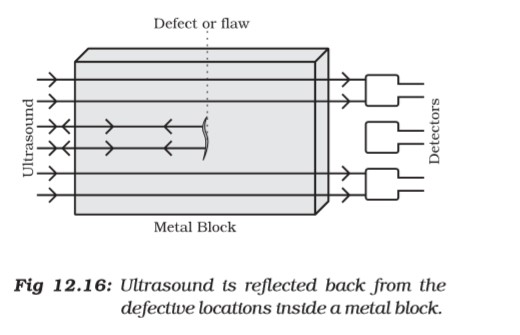 22. Explain how the human ear works.

(i) The outer ear is called ‘pinna’. It collects the sound from the surroundings.

(ii) The collected sound passes through the auditory canal.

(iii) At the end of the auditory canal there is a thin membrane called the ear drum or tympanic membrane.

(v) Similarly, the eardrum moves outward when a rarefaction reaches it. In this way the eardrum vibrates.

(vi) The vibrations are amplified several times by three bones (the hammer, anvil and stirrup) in the middle ear.

(vii) The middle ear transmits the amplified pressure variations received from the sound wave to the inner ear.

(viii) In the inner ear, the pressure variations are turned into electrical signals by the cochlea.

(ix) These electrical signals are sent to the brain via the auditory nerve, and the brain interprets them as sound. 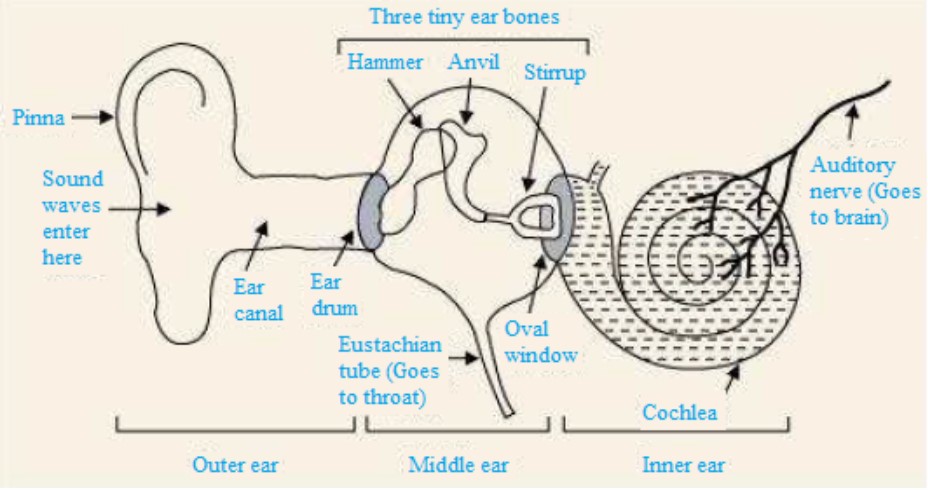 1. How does the sound produced by a vibrating object in a medium reach your ear?

1. Explain how sound is produced by your school bell.

When the school bell is hit with a hammer, it moves forward and backwards producing compression and rarefaction due to vibrations. This is how sound is produced by the school bell.

Sound waves require a medium to propagate to interact with the particles present in it. Therefore sound waves are called mechanical waves.

3. Suppose you and your friend are on the moon. Will you be able to hear any sound produced by your friend?

No. Sound waves require a medium to propagate. Due to the absence of atmosphere on the moon and since sound cannot travel in vacuum, I will not be able to hear any sound produced by my friend.

(a). Amplitude – The loudness of the sound and its amplitude is directly related to each other. Larger the amplitude louder is the sound.

(b). Frequency – The pitch of the sound and its frequency is directly related to each other. If the pitch is high then the frequency of sound is also high.

2. Guess which sound has a higher pitch: guitar or car horn?

The pitch of a sound is directly proportional to its frequency. Therefore, the guitar has a higher pitch when compared to a car horn.

3. What are wavelength, frequency, time period and amplitude of a sound wave?

(b) Frequency – Frequency is defined as the number of oscillations per second. The SI unit of frequency is hertz (Hz).

(c) Amplitude – Amplitude can be defined as the maximum height reached by the trough or crest of a sound wave.

(d) Time period – The time period is defined as the time required to produce one complete cycle of a sound wave.

4. How are the wavelength and frequency of a sound wave related to its speed?

Wavelength, speed, and frequency are related in the following way:

5. Calculate the wavelength of a sound wave whose frequency is 220 Hz and speed is 440 m/s in a given medium.

6. A person is listening to a tone of 500 Hz sitting at a distance of 450 m from the source of the sound. What is the time interval between successive compressions from the source?

The time interval between successive compressions from the source is equal to the time period and time period is reciprocal of the frequency.

7. Distinguish between loudness and intensity of sound.

The amount of sound energy passing through an area every second is called intensity of a sound wave. Loudness is defined by its amplitude.

1. In which of the three media, air, water or iron, does sound travel the fastest at a particular temperature?

1. An echo is heard in 3 s. What is the distance of the reflecting surface from the source, given that the speed of sound is 342 m/s?

In the given interval of time, sound must travel a distance which is twice the distance of reflecting surface and source.

Therefore, the distance of reflecting surface from the source =.

1. Why are the ceilings of concert halls curved?

Ceilings of concert halls are curved to uniformly spread sound in all directions after reflecting from the walls.

1. What is the audible range of the average human ear?

2. What is the range of frequencies associated with

1. A submarine emits a sonar pulse, which returns from an underwater cliff in 1.02 s. If the speed of sound in salt water is 1531 m/s, how far away is the cliff?