Q1 ) Make a comparison and write down ways in which plant cells are different from animal cells. 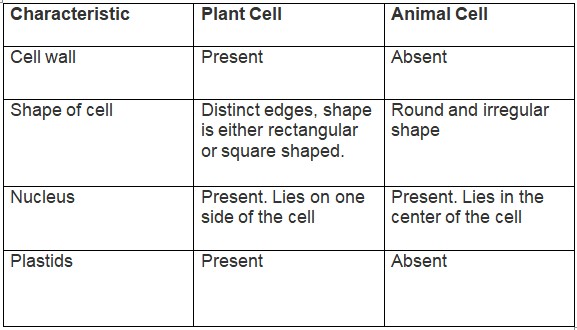 Q3 ) What would happen if the plasma membrane ruptures or breaks down?

If plasma membrane ruptures or breaks down then the inner content of the cell containing cytoplasm and different organelles will get exposed to the outer environment, thus becoming prone to damage and infection and ultimately leading to cell death.

Q4 ) What would happen to the life of a cell if there was no Golgi apparatus?

The absence of Golgi apparatus will be disable the cells from packing and dispatching materials that are produced by the cells.

Golgi apparatus is the organelle which produces lysosome which is the suicide bag of the cell.

Without lysosome, the invaded damaged cells cannot protect the nearby healthy cells from getting infected and the whole infection and destruction will rapidly damage every organs and organ systems, thus resulting in the failure of vital mechanisms and functions, leading to the death of an organism.

Q5 ) Which organelle is known as the powerhouse of the cell? Why?

Mitochondria is known as the powerhouse of the cell because it produces ATP (Adenosine triphosphate) which is the energy currency of the cell as it provides energy to the cell, thus helping it to perform every cellular metabolism and coordinate the functions in different tissues, organs and organ systems.

Q6 ) Where do the lipids and proteins constituting the cell membrane get synthesised?

Lipids and proteins are synthesized in the ER [Endoplasmic Reticulum].

Q7 ) How does an Amoeba obtain its food?

Amoeba obtain its food by cell membrane which helps in the formation of the food vacuole. The food vacuole will contain the food items that the amoeba had ingested with the help of pseudopodia.

Osmosis takes place only after the formation of concentration gradient in case of liquids.

(ii) Potato cup A is essential in this experiment as it is a significant reference to compare different scenarios seen in potato cups B, C and D.

Q10 ) Which type of cell division is required for growth and repair of body and which type is involved in formation of gametes?

Mitosis is the type of cell division which is required for growth and repair of body.
Mitosis is a type of equational division which can help in the generation of new cells and in their formation into the tissues which was destroyed at the site of injury in the body of the organism. In this case, if meiosis will take place, then it cannot supply more cells to the site of injury, thus resulting in the loss of blood and this will ultimately lead to the death of the organism.

Meiosis is the type of cell division which is involved in formation of gametes.
Meiosis is a type of reductional division which produces cell by reducing the number of chromosomes in them into half. In the gamete cell, if the gamete will contain full chromosomes due to mitosis, then at the time of fertilisation, when two gamete fuses (male gamete fuses with female gamete), then the chromosome number in the offspring will be doubled as compared to their parents, thus causing imbalance. But if each gamete will carry half the chromosomes, then the offspring will have the same number of chromosomes as that of their parents.

Q1 ) Who discovered cells, and how?

Cells were first discovered by Robert Hooke in 1665. He observed the cells in a cork slice with the help of a primitive microscope.

Q2 ) Why is the cell called the structural and functional unit of life?

Cell forms the basic structure of any living organism.
They are responsible for all the functions and mechanisms in the body of an organism.

That's why are called as the structural and functional unit of life.

Q1 ) How do substances like CO2 and water move in and out of the cell? Discuss.

Q2 ) Why is the plasma membrane called a selectively permeable membrane?

Plasma membrane is called as selectively permeable membrane because it only allows a selected molecules to pass through it.

It is the outermost layer in the animal cell while in plant cell it is present after the cell wall as cell wall protects plant cells from harsh environmental conditions.

Q1 ) Fill in the gaps in the following table illustrating differences between prokaryotic and eukaryotic cells. 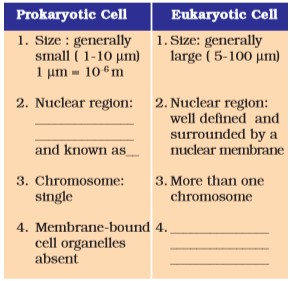 Can you name the two organelles we have studied that contain their own genetic material?

The two organelles that contain their own genetic material are:

1. Mitochondria This is also known as the powerhouse of the cell which helps in the production of energy.
Mitochondria is present in both plant cell and animal cell.

2. Plastids This contains chloroplast where the photosynthesis takes place in the presence of chlorophyll.
Plastids are only present in plant cells.

Q2 ) If the organisation of a cell is destroyed due to some physical or chemical influence, what will happen?

If the organization of a cell is destroyed due to some physical or chemical influence, then the lysosomes will burst out and the stored enzymes inside them will digest these destroyed cells, thus protecting the nearby cells from getting destroyed.

Q3 ) Why are lysosomes known as suicide bags?

If the cell's organization or function is invaded by foreign materials and gets destroyed due to physical or chemical factors, then the lysosomes bursts and the stored enzymes inside lysosomes digests these invaded cells.

As the lysosomes breaks down excess worn out cell parts, hence they are known as suicide bags.

Q4 ) Where are proteins synthesised inside the cell?

Proteins are synthesized inside the ribosomes of the cell.

Ribosomes are macromolecules that are found within all living cells that perform biological protein synthesis.