Q.9 Describe with the help of a diagram an instrument which can be used to detect a charged body.

An electroscope is used to detect whether a body is charged or not.

Even if the charged body is removed from touching the metallic disc, then also the aluminium leaves are seen to be present, away from each other as the same charges are still present in them. 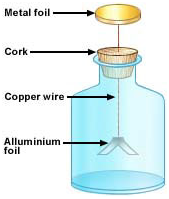 NCERT solutions of related questions for Some Natural Phenomena